Yesterday the Department of Commerce came out with the July 2010 construction numbers and the current state of affairs is not very attractive.  The numbers represent the seasonally adjusted annual value of construction work put in place and guess what, the numbers look more like the turn of the century then they do the year 2010.  The drop off has been so severe over the past 3 years we have wiped out 7 years of growth.

Private Residential Construction
It is no big secret that this sector has been hurting.  In fact the current annual level of construction is more like 1993.  This is a time prior to the dot-com boom, the peace dividend, and the housing bubble.  If residential grows at a pace of 4% per quarter it would take until the middle of the next decade to be back at 2004 levels.  Currently this year, it has contracted from January to July a total of 9.7%, which is not heading in the right direction.  At the annual pace of $240MM, it is down 61% from the high of $631MM in 2006.  Is there good news?  The only good news I can see is that it doesn't look like it can get much worse.  We have lost nearly two decades of growth in a single industry, for this sector to take a further declines would be a shock to most experts.  The retreat has wiped out the gains of the housing bubble and then a lot more, so I would expect this sector to begin to grow from this point, the question is going to be how much and how fast.

Private Non-Residential Construction (PNRC)
Though not nearly as bad as the residential market, PNRC is down 35% from it's high and down 5.5% for this year alone.  Construction activity is a little below the 2000 level and currently does not show signs of expanding.  Trying to predict this sector becomes increasingly difficult since it is driven by corporations that are now having to deal with new complex regulations that are not yet in effect.  The lending arm of our economy is all but dried up and it appears it has yet to come out from hibernation and until private projects can be funded, this sector appears dismal.  What is needed to boost PNRC is a game changer, in the 1980's we had the personal computer and in the 1990's we had the internet.  Both of those items dramatically increased productivity and required infrastructure changes.  If a game changing technology or shift comes along, there could be a boost in construction and we could regain the high within 2-3 years, otherwise, expect a slow recovery to the glory years of 2005-2006.

Public Construction
The one "shining" part of construction over the past 4 years.  Public construction has actually grown 64% since 2000 and has shown a growth of 1.8% for the current year, even though it is down from a high in 2009.  The government has been steadily growing construction work every year, with the exception of 2010.  Looking from 1993, every year has seen an average growth of 6% until 2009, but in the past 12 months that number has declined 5%.  This is driven more my state and local budgets than it is the stimulus, but the effects are going to be significant.  Public Construction has been the last remaining area that has grown.  This has stopped growing and I cannot see a political solution to the problem.  Additional borrowing does not seem to be on the table and for those that want to borrow more, keeping employees and benefits is the bigger rice bowl to protect.  Look at California or Illinois.  If they receive additional funds from the Feds, it will not go towards construction, but to strengthen their pension plans and prevent lay-offs.  A slow down in public construction has a more profound effect now than it has in recent history, due to its share of the pie.  In 1993 and even as late as 2007, public construction has always held a 23% portion of the construction value.  During those 14 years it was as high as 25% and as low as 21%, but always within that band.  Since then it has grown to 29%, 35%, and now 37% of the total construction.  A slow down in public construction will have a more significant effect on the overall industry.

Total Construction
So add it all up and it means that today's construction output looks more like the turn of the century than it does 2010.  In 3 years time the recession has devastated this industry and currently it continues to trend down.  For this year alone it has decline another 4.3% and that is with a growth in public construction which is surely to slow down.  The mix of construction has changed from 45% residential, 30% non-residential, and 25% public to a nearly 1/3 mix for each.  Once a recovery does take hold, it will take time to regain the heights of the past.  It took about 7 years of steady growth from 1993 to 2000 to grow as much as we need it to grow from 2010 to regain the levels of 2006.  Hopefully there is a game changing event that can allow this to happen at a faster pace.

Is ObamaCare Good for Subcontractors?
Quality Control, Be in Control
Construction: My Valentine
What Does Earth Day Mean for Construction?
What Value Do You Add?
Will Anti-Immigration Law Affect You?
Construction Customer Service
What are we really selling? 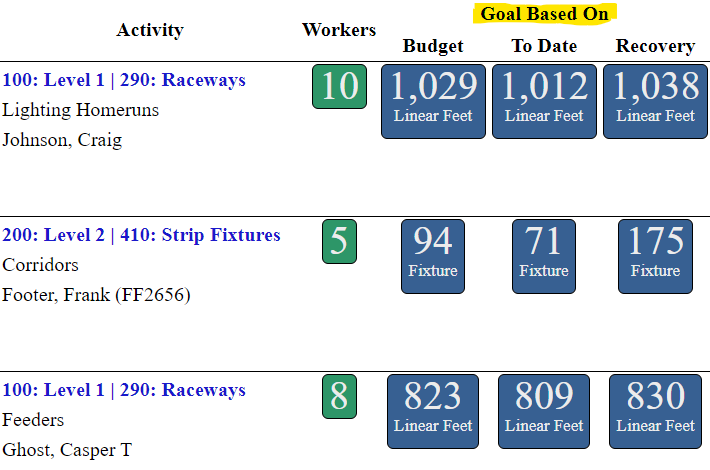 Do your crews know the production goals for the day? Are they based on budget expectations and actual productivity on the project?

Let them know what's expected of them every day to help them maintain focus for peak productivity.

All of it done without any additional work on your part.