Construction is Easier
with Smart Conalytics™ 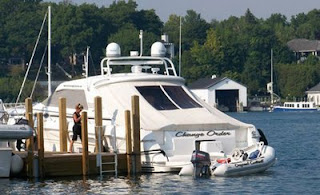 By now most of us have seen the change order and contract boat image that has been circulating around the internet over the past several years.  The big boat is rightly called the change order and the small dingy is called "Original Contract".  This brings forward a very interesting question about how people think.  When you view the image it enters into your mind that this must be Contractor's set-up and he can only afford a very small boat with the profit earned on the base bid and once he got done with the "typical" contractor change orders he was able to afford the larger boat with all of those profits.  If that is your thought, you are not alone, I have been showing this photo to many people and universally that is the thought, but I offer a different perspective.

The Original Contract was what was placed on the documents and then provided by the supplier (read as contractor).  When the Owner received his boat, he realized it greatly missed his original desire and had to go through the process to get what he wanted, the Change Order boat.  This photo, author unknown, really is a great depiction of the problems we face as a construction industry.  First that most people's perception (including contractor's) is that it must be the greedy contractor's boat and his practices that allow this to happen.  Secondly, that it also shows that typical gap between an Owner's desire and then their ability to relay that information correctly to designers and then their ability to correctly relay that information to Contractors to ensure that the original intent is met.

No matter how you look at the photo, besides it being a great screen saver, it deserves some deeper thought and the way that a picture can define the difficulties of an entire industry.  I guess it is best said that a picture is worth a thousand words.

Is there More Work with ObamaCare?
What Does Earth Day Mean for Construction?
Subcontractor Projecting 2010: Part 2
Construction Production, What to Track
You Can't Manage What You Don't Measure
What are we really selling?
Best Way to Win that Next Project
MEP Coordination: It’s Expensive to be Cheap

Construction is Easier
with Smart Conalytics™

Construction is Tough and Complex. Conalytics™ Make it Easier By Knowing Where to Focus Your Attention and Improving Your Team's Performance.